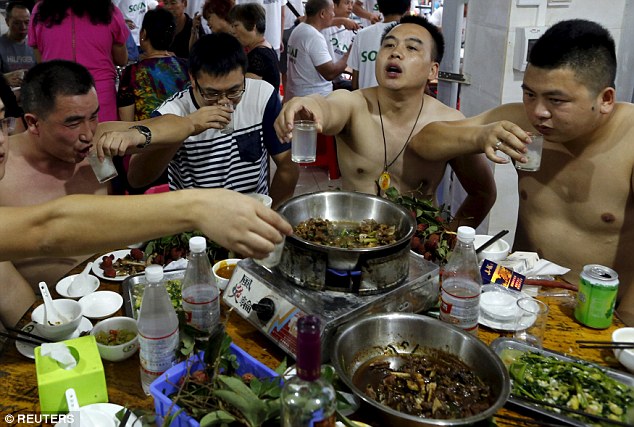 For those of you who aren’t friends with any white girls on facebook, this week was The Lychee and Dog Meat Festival, commonly referred to as “Yulin Dog Meat Festival.”  The festival is an annual celebration held in Yulin, Guangxi, China, during the summer solstice in which festival goers eat dog meat and lychees, among other tasty treats. The festival spans over a week, during which about 15,000 dogs are consumed.

Of course, this ended up being one of the top topics for people to get outraged over this week.  The hashtag #StopYulin2015 began trending and an online petition to end the festival has garnered over 4 million signatures.

Sometimes, cultural relativism rears it’s ugly head when western society should stand up for greater values.  Obvious examples are female genital mutilation in some African cultures and other human rights violations.  However, I find it hard to argue that eating dog meat is inherently “bad.”  Dog meat is a well established part of the Chinese diet in some parts of the nation.  Asian society has devoured dogs long before your friend Rachel decided that she was “gluten sensitive.”   Nearly 10 million dogs are eaten each year in China.  Meanwhile,  we in America slaughter over 100 million pigs each year though some studies have shown that pigs may be as intelligent as dogs, if not more so.  By the way, pigs are cute too.

Others have argued that the dogs served at the festival are mistreated before slaughter.  “Dear Morons: Stopping the #YulinDogMeatFestival is less to do with them being dogs & more to do with them being tortured and skinned alive,” Ricky Gervais wrote on Twitter last week.  Well Mr. Gervais, sometimes it’s best to not think too much about where your food comes from (also, the British version of The Office is my favorite show ever, please do a third season).  Here are a few links for those of you who are curious and brave enough to read about how your veal, beef, chicken, and eggs are produced.  Or you could take David Foster Wallace’s advice and Consider the Lobster.  If you want to skip those links, the short of it is that you’re lucky you weren’t born as a factory farm animal.

The international outrage has caused a backlash in Yulin.  I can hardly blame them.  If 4 million Hindus send a petition to my local BBQ joint I may have some strong words for those cow loving fucks.

I love dogs (even though mine can sometimes be a real pain in the ass).  Though I won’t go out of my way to eat one, I don’t think it’s our job as the worlds moral police force to decide other people shouldn’t eat dogs either.  If you want to actually make a difference for your furry friends here in America, consider supporting your local SPCA chapter.  Each year, approximately 2.7 million animals are euthanized in the U.S., including 1.2 million dogs and 1.4 million cats.  Meanwhile, puppy mills continue to contribute to our overpopulation problem by mass neglecting their animals for profit.

Or you could just write a few more angry posts along with pictures of sad puppies on your facebook to feel better about yourself, Rachel.

No, You’re a Bigot… and Dogs are Probably Delicious