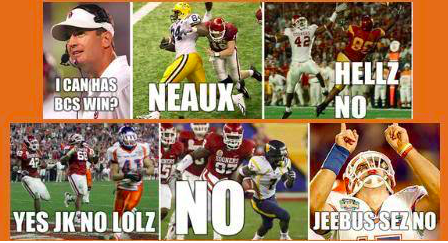 It’s been 16 years since Stoops’s thrilling 13-2 Orange Bowl victory brought the Sooners back to Switzer era levels of glory.  Since then, however, he’s been complete trash on the big stage…

So there you have it.  Six blowout losses and one win against mighty UCONN! It’s almost as if that gutsy Josh Heupel performance to outduel the almighty Chris Weinke has allowed Stoops a free pass for 16 years.  For some reason, I was expecting such a supposedly prestigious program to have higher standards.

But wait – I forgot…  Turns out they do have higher standards because I forgot about that time three years ago when they beat Alabama in the Sugar Bowl!!  Sure, everyone in New Orleans knows the whole Alabama squad was out on Bourbon St. strip clubs until the morning of the game.  Sure, a historic kick six the game prior might have left the team a tiny bit unmotivated to play in the ‘lowly’ Sugar Bowl instead of a third straight national championship.  Those players needed to understand that it’s still the Sugar Bowl and it’s still important!!  Stoops’s players knew that, and that’s why he’s on par with Nick Saban (according to every Sooner alumni I meet).

That being said, I do have to admit that Stoops finally put this debate to bed last night with Sugar Bowl victory #2 against the big bad Auburn Tigers (and their backup QB).  ‘SEC!  SEC!  SEC!’  Lol, wasn’t it so cute how the OU section chanted that for the entire second half??  Man they really own that conference now.  I don’t even see the point of watching Bama vs Clemson next Monday, the Sooners sit on the real throne of college football.

PS – I’m sure it’s going to get way better for Oklahoma in the near future.  It doesn’t matter if they’re losing half their squad to the NFL while Oklahoma State is returning everyone.  It doesn’t matter that they have to play Ohio State on the road instead of at home.  Who cares about that badass QB that West Virginia transferred over.  Tom Herman?  I’m sure he’ll be just as easy to beat as Charlie Strong.  And to top it all off, they don’t have to play Houston next year!!  Sooners 2017 National Champions = lock.

PPS – thank you so much to the Auburn students who booed Joe Mixon and chanted ‘you hit women!’ every single time he touched the ball.  I almost forgot that he did that!