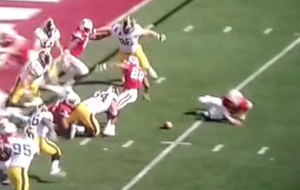 College picks are 25-18 going into this week, and that 17 point dog I touted to you on Thursday just casually rolled their way to an outright upset.  Like that bad guy on Fury Road said, “I AM YOUR REDEEMER!”  Do you want to be rich?  Follow these picks today.

Everybody is up on Iowa because they beat Wisconsin last week in quite possibly the worst college football game that’s ever been played.  Illinois has a stout defense and I’m very comfortable fading the overhyped Hawkeyes with them.

This game is a tough one to touch because 17 points is a lot tto lay in a rivalry game, but today’s game might be the biggest matchup disparity that we’ve seen in the Red River Shootout in the past twenty years.  Bob Stoops has a history of running up the score on Texas when he can, so I’m gonna go ahead and take OU.

Army is not too too terrible this year, but they’re not good enough to avoid a blowout at the hands of a team as good as Duke.  If Duke was laying this many points two weeks ago against Georgia Tech, which is a much better triple option team than Army, they still would have covered.

Boston College has one of the best defenses in the country and Wake Forest sucks.  This game is going to be boring to watch but defnitely fun to wager on and check the score and realize how easy of a cover it turned out to be.

Expect a big bounceback game from a Texas Tech offense that is absolute fire at home.  They are probably going to score over 60 points while we win money off them.

How the fuck is Nebraska getting points at home against a team that, as I referenced earlier, lost what might have been the worst college football game every played?  Wisconsin sucks this year.  Nebraska is not top tier but they’re not a bad team at all and Tommy Armstrong Jr. is a gamer.  He’s going to beat Stave outright at home easily, much less cover the spread.

Now that Tennessee is finally underdogs, it seems that people are finally starting to realize that they suck.  However, 3 points is not enough for them to cover.  Tennessee got pounded last week by Arkansas and Georgia has an even better rushing attack.  Don’t penalize Georgia for losing poorly to a pissed off Alabama team, it happens to everyone that stumbles into that situation.

If a hurricane didn’t hit Death Valley right after Notre Dame’s poor start, they would’ve beat Clemson going away.  It was almost impossible to pass downfield in that game and they still almost came back from 18 down.  Two touchdowns is an annoying amount to lay, but Notre Dame is one of the best home teams in the country and the Georgia Tech game showed that they are well practiced in defending the option.  I expect this top 5 coaching staff and basically an NFL defense to annihliate Navy.

As I said last week when we faded Clemson, Deshaun Watson is a fucking fraud.  He’s got great legs but can’t throw worth shit.  If he was running the triple option for Georgia Tech, that’d be fine.  Instead, he’s running a pro offense that people are slow to realize is underwhelming.  Georgia Tech has had a really disappointing season, but they’re still a very good team.  They’ve lost to two elite teams in Notre Dame and Duke, and were up by 21 before losing to North Carolina last week.  Eight points is plenty comfortable enough.

Those poor Gamecocks have been having such a shitty season and just realized this week they have to travel to LSU instead of being home.  Who knows how they’ve even been able to practice this week.  LSU had a really disappointing start against against Eastern Michigan last week, only leading 20-14 at half.  They are well coached enough to not be coming out flat twice in a row, and this coaching staff will also be trying to pad Fournette’s stats to help his Heisman campaign, so lay the points in this easy rout.

We nailed the OSU fade last week, as Kansas State almost pulled off the outright upset even though they were down to their 4th string quarterback.  Oklahoma State is complete garbage.  They played only cupcakes in their non conference games and struggled against them.  Egregious special teams errors by Texas giftwrapped them  what might be the most embarrassing win in all of college this year.  And they almost lost to a 4th string quarterback last week.  West Virginia will pound the shit out of them in Morgantown.

Florida looked awesome last week, but they are still a raw team and are going on the road.  This is a classic letdown game and five is plenty of points for a home dog to cover.

These teams are even enough in talent for us to be confident that the game will be very close. Kaaya and The U almost won this game last year against Famous Jameis.  Now, they are even better while Florida State is much worse.  Miami will definitely cover 7 points.

The people rating Utah as a top five team clearly only watched the Oregon game and no other down of football that they’ve played.  I have seen some other Utah games, and they’ve shown me nothing more than an underwhelming squad.  The Cal defense is shaky, but future #1 draft pick Jared Goff is going to pick apart this team enough times to cover a touchdown’s worth of points.