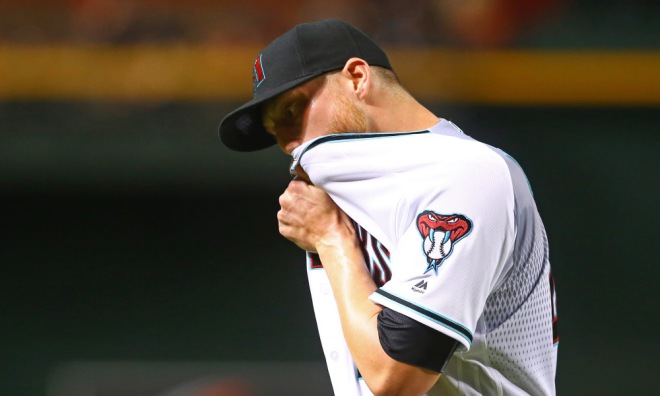 The Rangers got murdered by a combined score of 28-6 over two games this week, but it’s still the D-Backs that leave this series in shame.  You see we had a former pitcher of theirs by the name of Shelby Miller on our roster, but we DFA’d him over the 4th.  I’m disappointed because he’s shown so much potential in the past, but it had to be done because he was absolute dogshit (8.59 ERA over 8 starts = dogshit).

For those who don’t know, he was with Arizona the past few years with equally dogshit numbers and that is how he became a free agent for Texas to sign.  Fortunately for us, he was nothing more than a lottery ticket minimum signing that didn’t pan out like Minor and Lynn.  Unfortunately for Arizona, they they mortgaged their entire future (now present) to trade for him.  Here is my quote from that linked blog of mine from December 11, 2015:

“I know a lot of people out there view Miller as more of a top end #2 instead of a true ace, but that’s bullshit.  He was firmly in the Cy Young mix for a large chunk of last season until his run support slid from atrocious to literally nonexistent.  Once he had to start going for a complete game shutout every outing, his performance started to suffer (even though he was still awesome compared to most pitchers).  With arguably the best offense in the NL behind him now, he’s gonna breeze through the 20 win mark.”

Boy was I wrong about that. What I wasn’t wrong about though was that it was a dumb trade and that’s assuming Shelby Miller was an actual ace and not a fucken AAA has been.  Good god!  Seriously maybe the worst trade ever holy shit.

The craziest thing about this all is that their owner chose this over a chose this over a Jose Fernandez(!) trade for even less prospects. I mean jesus can you fucking believe that??  Imagine if the d bags had actually pulled the trigger for one of the best pitching talents in baseball history instead of being a bunch of cowards.  They would be contending or maybe even winning the WS every year with a Fernandez/Grienke/Ray death rotation plus Goldschmidt and Swanson still in the lineup.

There also wouldn’t’ve been any water around for Jose to speedboat around on coke binges in and he’d prolly still be alive.  Things might’ve been better off. I bet this collapse wouldn’t have happened either:

Diamondbacks Leave Texas in Shame Despite Whatever the Score Was
Loading Comments...