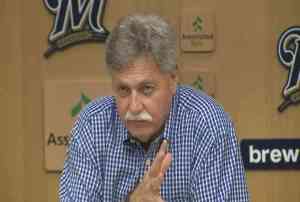 Earlier this week, Doug Melvin stepped down as GM of the Milwaukee Brewers.  Although this news was lightly publicized, it cannot be understated how brilliant of a baseball executive he was.

In 1994, he took over as GM for the Texas Rangers, who at that point were arguably amongst the bottom five worst franchises in all of professional sports.  They existed for over 30 years and had yet to achieve one single postseason appearance, but Melvin had them in the playoffs within two years after taking over.  They ended up making the postseason three times in four years, and although they got beaten down by Yankees each time, they were a pretty damn fun and exciting team to watch.

In 2002, he became GM of the Brewers, a slightly less shitty organization than the Rangers were but still one that was coming off ten straight losing seasons and a 106 loss season the year before.  Again, within a couple of years, his team stopped sucking and eventually made the playoffs twice.  If the Brewers had any money whatsoever to keep some of the talent he acquired (Zach Grienke, C.C. Sabathia, Prince Fielder, to name a few), that team could’ve made many serious runs for the World Series.

So what made this Canadian-born executive so damn good at constructing winning rosters?  Sure, he made several shrewd trades and excellent draft picks, but I think there’s another element that helped him out quite a bit.  See if you can take a guess after I name, off the top of my head, the five best hitters that have ever played for him…

Doug Melvin: The Man Who Got Two Piss Poor Franchises to Suck so Much Less (with Steroids)
Loading Comments...