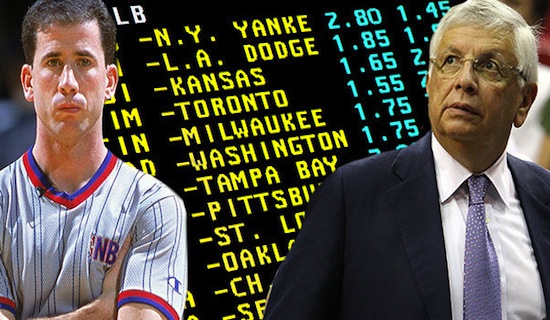 There’s been a lot of harsh criticism this year in regards to the state of NFL officiating, and several questionable calls in last night’s Denver-New England showdown surely wont help matters.  I do admit that the refs could be better than what they’ve shown this year, but I don’t think it’s as bad as everyone is making it out to be, and it’s probably better if we all just start chilling out over this.  When you compare NFL officials to those of lesser criticized leagues, especially the NBA, they’re doing an outstanding job.

The definition of a legal catch has been a common point of contention this year, but I say its infinitely easier to define a catch in football than it is to define a foul in basketball.  You have controversial catch/no catch calls in maybe once every 2-3 NFL games.  You have controversial foul/no foul calls in maybe once ever 2-3 possessions in NBA games.  The same goes for pass interference.  Why does the NFL get so much criticism for plays that only happen sporadically while the NBA gets a free pass for the shady looking arbitrary calls they make every two minutes?

In the past five years or so, I can only think of one NFL playoff game (Dallas vs Detroit last year) where you can argue that the officials screwed a team over.  In the NBA playoffs, you can easily bitch up a good case for the refs screwing teams out of wins at least twice per series.  Shit, Tim Donaghy served jail time for straight up rigging NBA playoff games while David Stern remained (allegedly) oblivious…  Do you think that could ever fly in the NFL?

It’s not just the NBA that is inexplicably getting a free pass by the fans.  The MLB is notorious for having inconsistent strike zones.  Granted, calling balls and strikes is probably the hardest task of any official in sports, but it’s also difficult to let umpires off the hook when they make it impossible to strive for improvement.  Has this been affecting playoff games?  Oh yeah…  What on god’s green earth was this…

While I don’t think the state of affairs is nearly as bad in the NFL as the public makes it out to be, there are a couple of improvements that would make people a lot happier…

Increase transparency – the NFL is probably the most transparent of the four major sports leagues, but they would be better if they made their grading system and the scores for each of the crews available to the public.  If TV networks were able to overlay these scores and ranks whenever refs are making announcements, it would help fans pinpoint who the real problem officials are and hold them more accountable.  It would also help show that the officials are doing a better job than people realize…

Scale back to the original challenge system – Drew Magary noted in an excellent piece last week that the over-saturation of replay is having an adverse impact on the refs’ performances.  While I think it’d be retarded to abolish the challenge system entirely, it does need to be scaled back.  The challenge system was perfect when the NFL first instituted it…

Let’s go back to that!  Sure, you’re not gonna correct all of the ticky-tack errors that we’re stopping the games down for today, but that shouldn’t matter.  If everyone thinks that one athlete is better than his opponent on a given play, we shouldn’t have wait up and confirm that it’s a 100% correct call.  If it’s a horrible missed call that legitimately compromises the integrity of the game, we’ll still be able to fix it!

Also, it added an element of strategy that was always interesting (wtf Schottenheimer??).

Make penalties challengeable – The NFL is hesitant to do this because of the subjective nature of these rules, and for a long time I’ve thought their reasoning was legit.  However, the NCAA has demonstrated over the past two years with their targeting reviews that it’s not too difficult to incorporate subjective calls into instant replay.  Given these calls’ high degree of impact on game results, it would be fair to allow coaches to challenge them.

Granted, we should only be seeing this if the challenge system is scaled back in the first place so only the egregious missed calls stop down the games.