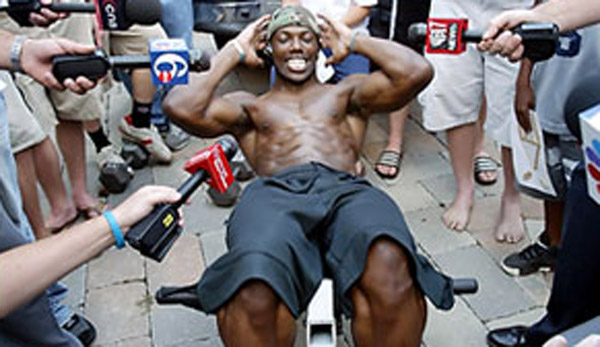 I thought the debate over TO being Hall of Fame worthy would be interesting, albeit inconsequential.  I’m shocked, however, by this unanimous outcry over his rejection.  It’s unreal tbqh.

Listen, I know he’s one of the most talented players of all time.  I know his stats are transcendental.  However, I also remember him canceling out all that production by being literally the worst teammate in the history of professional sports!  He played for five teams in his career (six if you count the Seahawks), and all five (six*) ended up booting him out the door as quickly as possible.  Hall of Famers are supposed to be invaluable pieces to their franchises, yet someone who got canned by half a dozen teams is supposed to be a shoo-in?  Fuck that.

Look at the QBs he played for – Steve Young, Jeff Garcia, Donovan McNabb, Drew Bledsoe, Tony Romo, Carson Palmer.  They’re all Pro Bowlers.  Some are even legends.  They all hated him!  That’s insane.

It feels weird seeming alone in this viewpoint, because I was one of his biggest fans.  He was a troller’s dream.  Nothing was better than the 07 season when you could show up to bars on Sundays with his jersey on and trigger everyone without saying a single word.  One time, I wore his jersey to a Mavs-Hornets playoff game in New Orleans and got shit thrown at me.  It was awesome!

Even then, though, I knew he had to go.  He dropped a shit load of passes (especially in big moments) and was a malignant fucken tumor to that locker room.  Jerry Jones is arguably the greatest troll of all time and even he ran out of patience with TO’s shit.

I guess it’s common to romanticize the past, but lets chill out with the hysteria over his annual ‘snubbing’.  Besides, if you think about it, this is actually working out perfectly for TO.  Now, for a couple weeks every election season, he’s relevant enough again to partake in his favorite pastime – whining to the media.  It also helps him get interviews and shit so he can try to be less broke.

TO HOF ‘Snub’ Triggers Every NFL Fan, for Some Reason
Loading Comments...