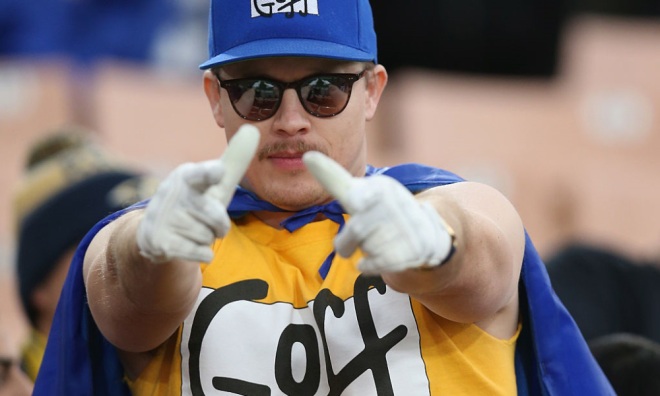 All of a sudden, Sunday’s match for America’s Team looks to be much more challenging than expected.  I started hyping Goff as Aaron Rodgers Lite a couple years ago, and everyone’s been harping on that ever since.  Yeah last year was pretty brutal, but then Goff got a new coach, a revamped offensive line, some actual receivers, etc. etc. and now everyone is shocked that he looks kind of awesome.  Whaddya know!!

It’s just so odd how much this has taken people aback.  It’s almost as if #1 overall draft picks are too talented to call busts by the time they’re 22 years old.  Especially when the closest counterpart in the draft (Wentz) was a first year starter for Division 1-AA North Dakota State at that same age.  Crazy how that shit works out…

While we’re on the subject, I’d like to go off on a short tangent regarding Jeff Fisher.  Stan Kroenke paid him $35 million over 5 years and gave him an undisclosed extension right before firing him.  A lot of people say that said it was dumb to pay him for all the losing.  Those people have been hoodwinked.  There’s a lot of bad things you can say about Kroenke, but one thing you cannot say is that he’s bad with money.

Fisher was a legend for Tennessee.  One of the great coaches of the era.  Then he got paid half a hundred mill in his late age to help a team tank.  Kroenke wanted that team to suck so he could make sure it got the fuck out of St. Louis, and he paid Fisher out the ass to make sure it happened. Brilliant if you ask me.