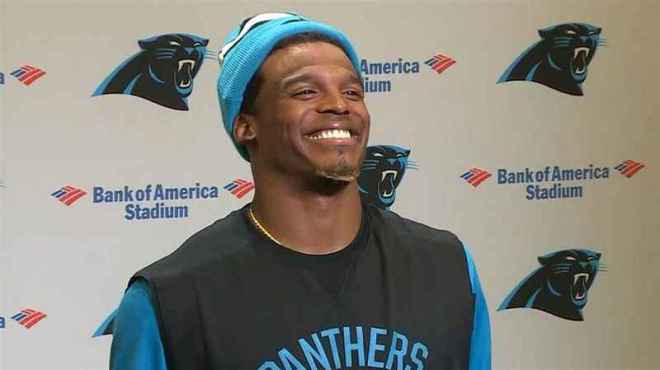 Listen I know it’s retarded what Cam said and he has to know better in 2017 yada yada yada…  but I’m still feeling sad for the guy here.  When you see this clip and take away anything but a clumsy attempt at sarcasm, you have a stick up your ass.

Cam makes it really hard for people to root for him pic.twitter.com/uF0mGdL9Ua

Dude is one of the most generous and charitable human beings in the league, but now one bad joke makes him a no-good misogynist.  Did you know the word ‘female’ is offensive?  Apparently it is because it’s rooted by the word ‘male’.  Now that Cam said it, he has to lose endorsements.

Awfully ironic how, in just two years, he’s gone from the focal point of race baiters to the latest victim of SJW outrage.  Wanna know what makes this ultra-lib slander even more ironic?  The fact that Cam Newton is gay.

I’m not joking around here.  Just about everyone I know who’s worked in sports has known someone or known someone who’s known someone who swears to the fact that Cam Newton’s gay.  I personally have four disparate sources of friends who back this up.  Not that there’s anything wrong with that!

Maybe that’s why this Jourdan Rodrigue broad is so frustrated with him.  If I remember Playmakers correctly, hot young reporters are employed to sleep with players for scoops.  That may be easy for her with other players, but obviously Cam isn’t interested.  Or maybe she hates him because she’s just a racist herself.

Anyway, all I wanted to say was that Rosie the Riveter pin he wore on Sunday was genuinely classy as hell.  Also, in Super Bowl 50 his receivers blew ass (and not in the way he likes it), and that still sucks for him.

Oh yeah and also, happy coming out day to all my gay homies!